We’re used to imagining politics on a Left-Right axis. 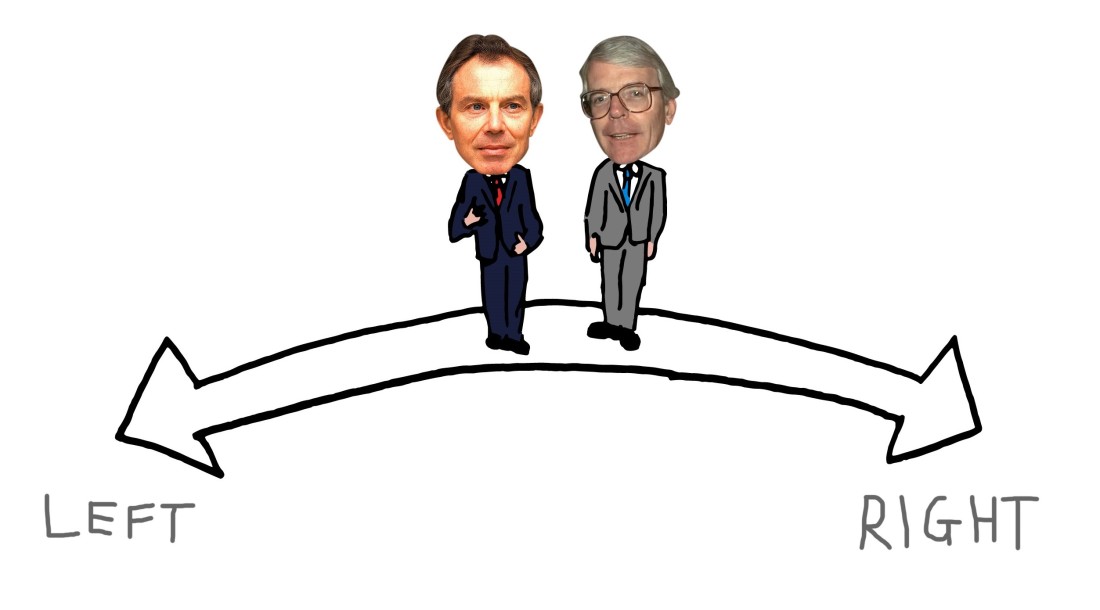 It all started 228 years ago in the French National Assembly, when revolutionaries sat on the left and monarchists on the right.

In 2010, the UK’s three main political parties were centrist. The differences in their manifestos were few and nuanced. 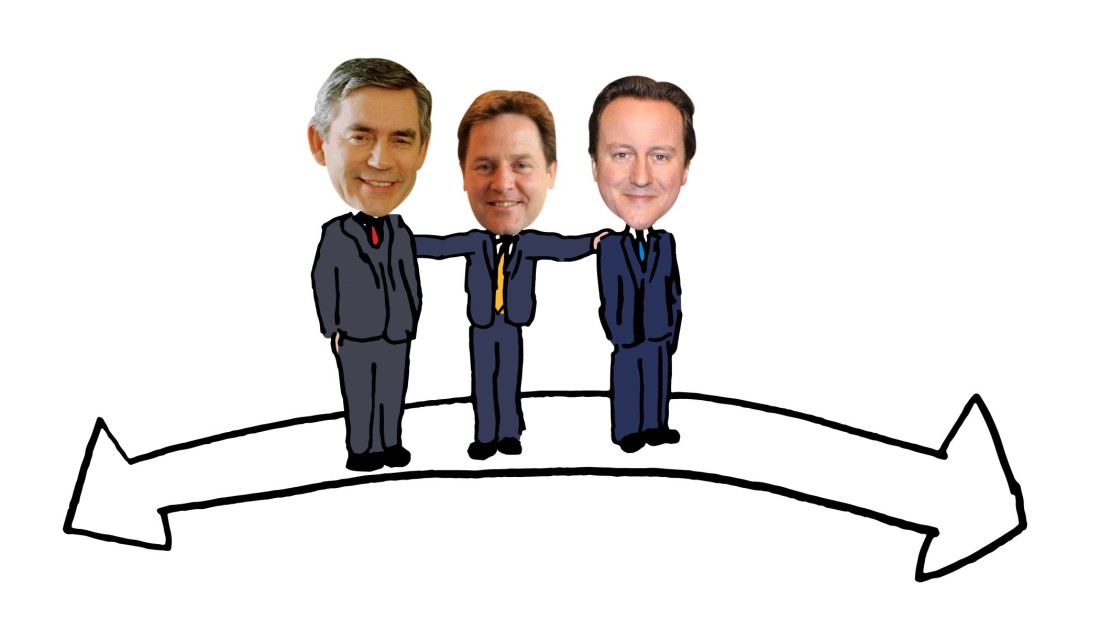 In 2015 the Lib Dems – most centrist of the three – were rejected by voters and effectively wiped out.

Just a few months after the 2015 election Jeremy Corbyn shocked centrist commentators by becoming the new “hard-left” leader of the Labour party.

Like Nigel Farage he was a long-spoken critic of globalisation – though the two disagreed on everything from healthcare to climate change. 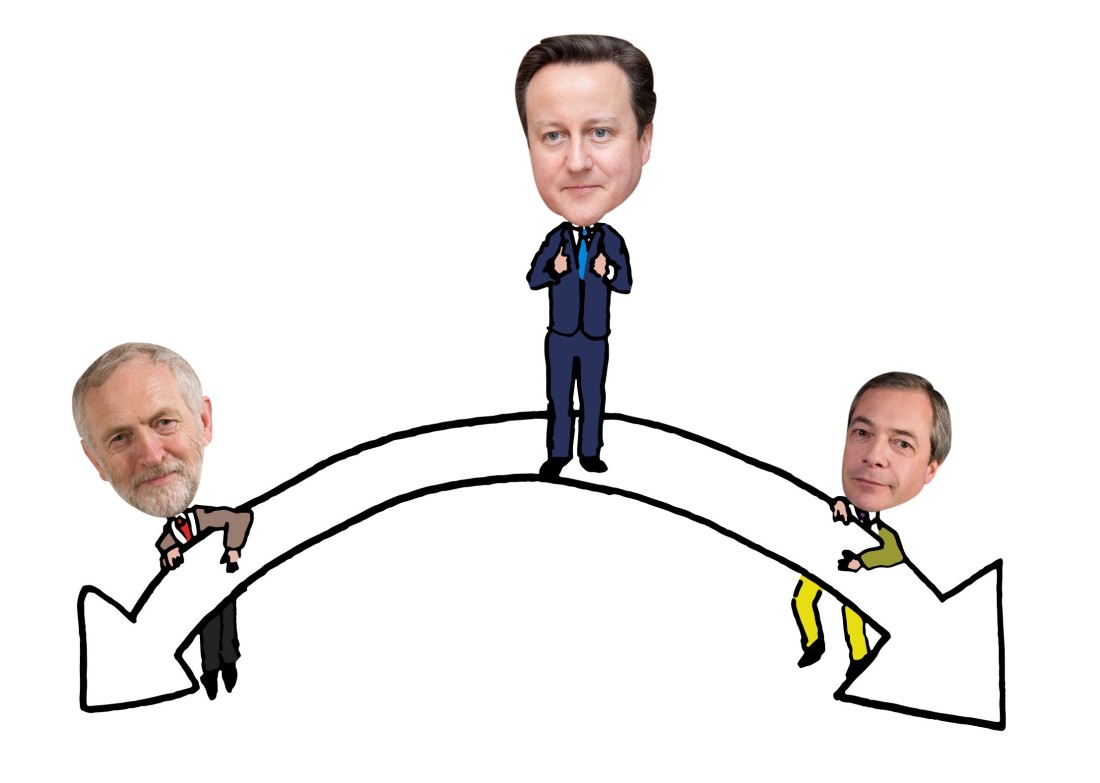 At the beginning of 2016 politics was starting to look a bit complicated.

The centre ground began to shake.

During the EU referendum campaign, Prime Minister David Cameron stood shoulder to shoulder with all three of the surviving previous Prime Ministers and spoke the same message.

Jeremy Corbyn meanwhile, said his passion for remaining in the EU scored about 7/10. He nonetheless campaigned for and then voted Remain.

Nigel Farage worked his right-wing anti-EU message, and it was popular.

And then 17,410,742 people voted to leave the European Union. By doing so, they were rejecting the explicit advice of the four centrist Prime Ministers who had led the country for the last 26 years.

Nigel Farage gloated and basked in his success – he had earned a colossal political victory.

Then, partly in retaliation for the “7/10” comments, Tony Blair and other centrist political people organised a coup against Jeremy Corbyn. It was described as a struggle over the Labour Party’s core identity – was Labour a centre-left political party or was it socialist ?

Labour members decided it was the latter, and voted for an anti-establishment Labour party to be led by Corbyn.

And in doing so, they awkwardly redefined the Left-Right axis (A similar story could be also told about Trump, Sanders and Clinton).

Of course this is just theoretical speculation. But still, here are some quotes from our protagonists that seem to agree:

“Against populism, the center must hold.”

“The centre ground is the key to our political salvation. Proponents of an an open, tolerant society must find a new voice to speak against the foghorns of populism.”

“We cannot abandon our socialist principles because we are told this is the only way to win power. That is nonsense. The reason we are losing ground to the right today is because the message of what socialism is and what it can achieve in people’s daily lives has been steadily diluted. Many people no longer understand what we stand for.

Too often in recent years the left in Europe has been seen as apologists for a broken system rather than the answer to how to deliver radical social and economic reform for the 21st century…If we are only seen as protectors of the status quo how can we expect people to turn to us when they can see that status quo has failed?”

“It does have in it some really very eye-catching, radical, interesting and so far callers have thought, exciting things.”

“It’s partly an anger for sure at the elites, a desire to choose people who are going to rattle the cage. And it’s partly also about social media, which is itself a revolutionary phenomenon which can generate an enormous wave of enthusiasm at speed. When I first started in politics, these things took so long to build up momentum; your decision points were well before that moment was achieved. But it’s also a loss of faith in that strong, centrist progressive position and we’ve got to recover that.”

“I will be championing the things that I have always cared about, which is where is the voice for the liberal mainstream majority of this country, who do not want to be governed from the extremes.”

Congratulations to my friend @EmmanuelMacron. Proof you can win from the centre. At last, the chance for the leadership that France needs

“Emmanuel spoke to me some time before he set up En Marche, and kind of floated the idea by me.”

“Liberalism and globalisation have delivered unprecedented levels of wealth and opportunity.”

“[Some people] see the emergence of a new global elite who sometimes seem to play by a different set of rules and whose lives are far removed from their everyday existence. And the tensions and differences between those who are gaining from globalisation and those who feel they are losing out have been exposed ever more starkly through the growth of social media.”

“Political upheaval is becoming the norm. The old certainties are dramatically falling away and we are coming to expect the unexpected. People know there can be no more business as usual. But the question is what will replace it.

…Not since the late 1970s have we seen such a dramatic collapse in confidence in the political and economic order.

…We can see the choice taken by politicians on the hard right – to whip up division against migrants, Muslims, Mexicans, women, LGBT people, people with disabilities. The fake anti-elitism of rich white men like Nigel Farage and Donald Trump. It’s farcical at one level, but in reality it’s no joke.

We have to choose a different path…”

And now, without further ado, here’s my take on the 2017 general election: 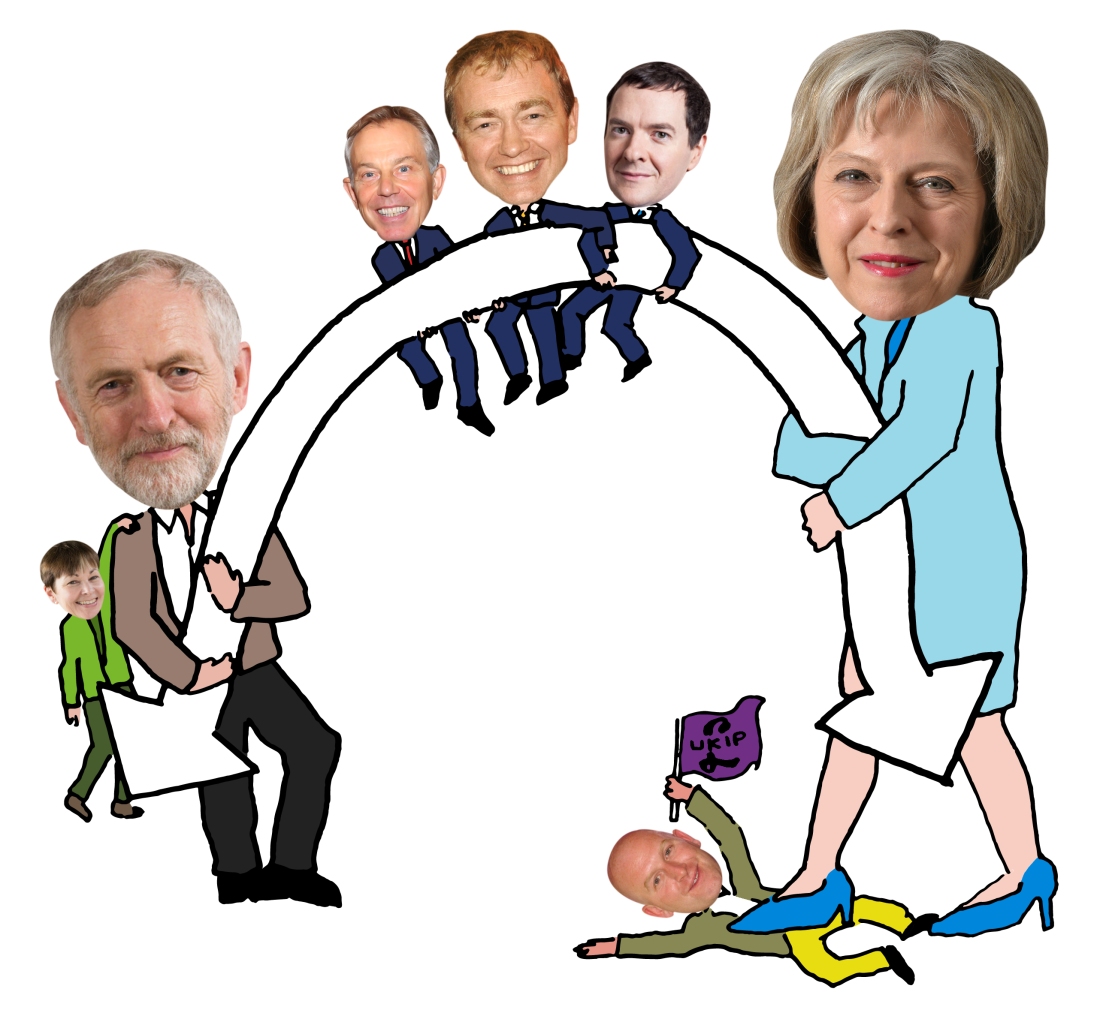 If you enjoyed this, you can support future content by buying me a coffee: